Why does a project need React?

Why does a project need React?

By Teknorix Administrator on October 19, 2020

We are going to revamp the topic most front-end and full stack developers would already have spoken about at least once in their career, “Why do we use React?”.

With the language’s popularity sky-rocketing since the past few years, React has been a framework that doesn’t need any introduction.

React is a Javascript based library used to create highly reactive, super fast user interfaces. As React is a library that runs on Javascript, it renders in the browser which means users do not have to wait for page reloads for a long time.
React.js has been the most loved Framework chosen by developers in the recent survey created by Stackoverflow.

Let us dive deeper into the advantages of using React.

React, being a user interface library which is heavily based on components used in the form of JSX, makes the process of writing the code easier, and manageable. The code becomes concise and extremely fast to render. It also has the most important advantage to its credit, it is reusable. React code can then be used in SPA’s(Single Page Application) or Multiple Page Application individually or paired with several other components. This is a boon for developers on larger projects and becomes essential when many people work in a team on various parts of a project.

Why prefer React.js over Javascript?

Javascript is a very powerful language by itself. In bigger applications, targeting each element manually in the code using QuerySelectors and to restructure the code becomes a nightmare. The use of Jquery may subsequently make targeting elements easier but it becomes heavy on the browser eventually.
React makes the state management of user interface comparatively easier. It also allows us to focus more on business logic without making the application cumbersome. 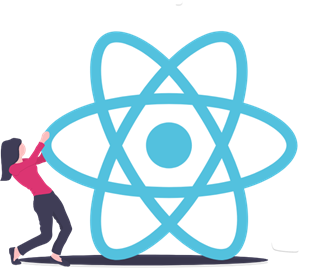 With a greater demand for developers over this stack, it is safe to say this framework is here to stay for a long run.